The Granville Cooperative Extension Center is now open to walk-ins. Please call or email to contact an Agent.

Find this article at:
go.ncsu.edu/readext?672568
— Written By Paul Westfall

For years, livestock producers have battled external parasites, including horn flies, face flies, biting flies, and ticks. To be truthful, more attention has been placed on controlling flies than other external parasites. That plan may need to be changed with the discovery of the Asian Longhorn Tick in Virginia and North Carolina. This tick is very different from the ticks that we are used to, which are the Lone Star tick, the brown dog tick, the black-legged tick (deer tick), and the American dog tick. While those species are prolific and are a problem for livestock producers, and may be a threat to humans due to the diseases they can carry, The Asian Longhorn tick is a game-changer. 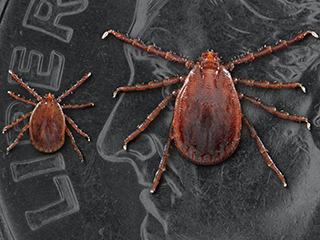 There are a couple of things about this tick that make it a major threat to livestock. First – the female can reproduce (lay viable eggs) without a male, and each female can lay up to 2000 eggs. All Asian Longhorn Ticks are considered to be females. Second – this tick has a relatively short life cycle. It can complete its 3-stage life cycle in six months.

This tick has been in the USA since about 2010, and has been spreading since. There are several counties in Virginia where it has been documented, and it was found in Surry County, NC last summer. There were at least 6 cattle found dead that were attributed to the extremely heavy tick infestations they had, and they were thought to have died from anemia.

Recently, Extension Agents were able to learn more about his tick and what to look for. A recording of that training is available at https://go.ncsu.edu/whjcmqu. I encourage folks to watch this webinar to learn more about what to look for and what to do if you suspect that you have this tick on your farm. Be sure to let me know and I will assist in getting samples submitted for identification.

Tick control measures need to be in place before this tick becomes a problem, and we may need to dust off some control measures that haven’t been used recently. A couple of those would be using a back rub and using pour-on materials that include permethrins or other recommended tick control materials. One note – if used properly, fly control ear tags have been successful in keeping populations of other tick species manageable. That likely will not work with the Asian Longhorn tick due to the short life cycle and numbers of nymphs and adults present at one time. There just is not enough insecticide to be effective the further away from the ear, leaving the flanks and underside vulnerable. For heavy infestations, a pasture treatment of insecticide may be needed.

A cultural practice to keep tick populations under control includes keeping grass and weeds at a lower height through grazing or mowing. Taller grass and weeds make better habitat for ticks.

To scout for ticks, use a “tick flag” – which is basically dragging a 36 “x 36” or 48”x 48” light-colored cloth across the ground and see what attaches and starts crawling around. Specimens can be collected using this method.